Welcome to hell — or whatevs…. I chose WordPress to be closer to my friend Miss Strawberry [link] and Miss Dino [link]

Today was a good but quiet day. I just had BBQ pork chops, rice and cauliflower for dinner. Yum! =D

I love my layout here. It is Card Captor Sakura. OMG. I just have a good idea for a meme! *cackles wildly* If Strawberry knows me, she will know what the heck I am talking about. Don’tcha! lol

Hey there… a very late post but I just wanted to say that I will be getting a used 3DS XL (in chic black). It has a bit of wear and tear but I can play Pokemon on it, so I’m happy. =D

Anyways, I need to go check on a download.

Being in Canada, sunny weather is fleeting, especially the more northern you go. But, usually in the summer (well, maybe not this summer) there is a great lot of sunny weather. It’s nice when it’s sunny and warm.

That’s when I get my AO3 invite! =D I am so excited. I get to write TPB fic again. God knows how long it’s been that I have written fic, but no one is perfect. I have to try a drabble but for me that will be hard bc I often have diarrhea of the written word. It’s crazy!

Do you like my layout? I am going to do a Cas layout once I get home from the sz clinic. Or maybe I can do it now? Hm… I still need to watch my Sims4 d/l. Also as I said b4, I want to get all the seasons of Bates Motel too. I will do that later. =D

Sunday is my 43th birthday. I still can’t believe how old that sounds… but I am a kid at heart so age doesn’t matter. Coll is taking me out for a bit of birthday cheesecake at Mike’s cafe (Books, Cafe and things) and an apple cinnamon tea. And then, later, we are going to have BIRTHDAY PANZEROTTI!!!!!! (Well Coll isn’t but Justin & I are — Coll is having a caesar salad and some cheesy garlic toast) Well, it could be *high fives Strawberry* a HAM SAMMICH!!!!!!!!!! Right?

I just saw this while looking for pix. It’s so purrfectly Yuma. 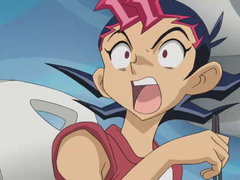 Does this remind you of another anime bad boy?

I need a new hobby. LOL

I am going to d/l every season of Bates Motel and binge watch it. I miss that show.

Right? Every now an again a ninja will swoop by and grab your “HAM SAMMICH!!!!!!!” It best be Koga or Naruto too. Probably Naruto would stuff his face. lol